Justin Cook
Story Driven games have always been Justin's jam, and this naturally led to him becoming a seasoned JRPG veteran. His standout favorites include Kingdom Hearts, Final Fantasy and Persona, and this love of JRPGs makes him a handy companion, whether you need a hand navigating Momentos, or just want to hit Shibuya for some Ramen.

Gather around as we witness something special. We are bringing down another treasure demon from the beloved Persona series. Like myself, I am sure there are plenty of Phantom Thieves who became frustrated from treasure demons fleeing in battle. You miss out on a big chunk of money and experience. You also wasted resources and SP trying to defeat an enemy that escaped. 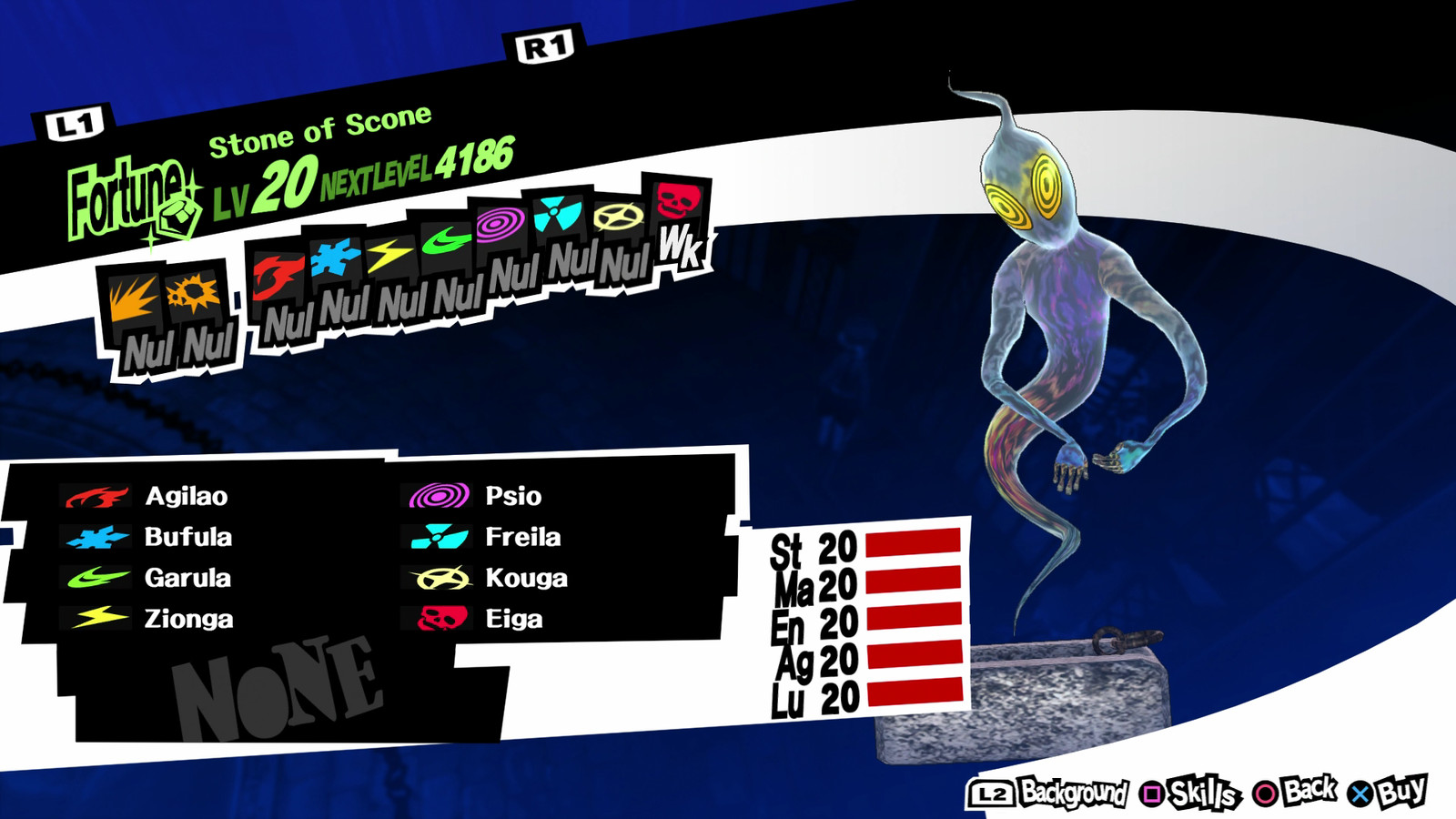 Stone of Scone, also named Stone of Destiny, is the demon in our crosshairs today. Hailing from Scotland, the Stone of Scone was used in history for the inauguration of kings. In 1296, England seized the stone and had it built into a throne where later coronations would take place. Enough with the history lesson. It’s time to get back to our guide.

Stone of Scone is the first of the Fortune Arcana connecting Joker with our fortune teller Chihaya Mifune. After meeting Chihaya, you will want this guide to make fast money.

Hunting treasure demons is never easy. Most of the time, you never know when one will pop up, but most of the first round of attacks consists of trying to find their weakness.

After four turns of attacking, if you haven’t defeated them, they run away, and you start the grueling process again. Stone of Scone is one of the easier targets because when you face him, you have a higher-level party.

Also, a higher-level Persona will make light work of these encounters. I’m here to show you the weaknesses of Stone of Scone to make your fight a lot easier.

Stone of Scone is exclusive to the fifth entry in the Persona series. When it comes to actual design, it is similar to the other treasure demons. The ghoul or ghost (whichever you call it) with yellow eyes rests on top of the actual Stone of Scone.

Something I noticed about Persona 5 is that the developers made sure to have historical objects in the game resemble their actual counterparts.

Granted Stone of Scone doesn’t have too much detail like Koh-i-Noor and the Queen’s Necklace, but that doesn’t mean you should give it any less attention. 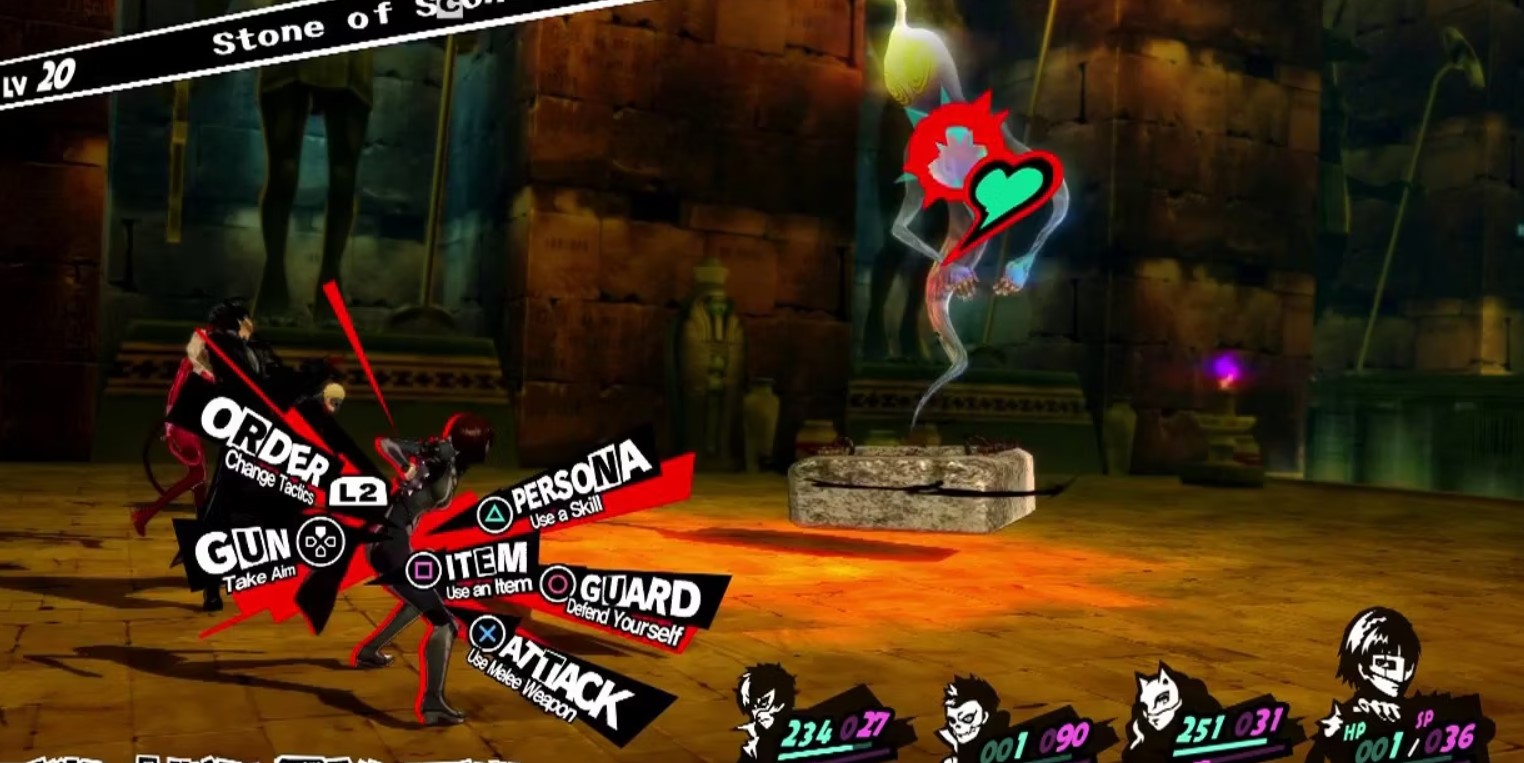 You won’t find the Stone in Scotland or England, but it is in a palace. It appears first in a “tomb,” according to Futaba. The best time Stone of Scone pops up is when you are under high alert in Futaba’s Palace. Funny enough, I got ambushed and faced four waves of enemies. Upon the last wave, Stone of Scone appeared.

Not that it will always happen, but it was a nice incentive not to flee myself. Outside of Futaba’s Palace, the Stone of Scone is in the Akzeriyyuth area in Mementos. Wait for any extreme weather, and it will show up more often.

It’s time to take down another treasure demon, and I promise it will be a breeze. If you are playing the base game or Royal (I suggest Royal), your success will depend on the demon’s weakness. The first thing you need to have (this applies mainly to Persona 5 Royal players) is Panther in the starting lineup.

Each character has their elemental skill they specialize in, but Ann is our go-to for this fight. Stone of Scone is weak to fire in Royal, so any fire move is going to down him. Although in the base game, Stone of Scone is doesn’t fair well against curse attacks, making him a great target for Joker.

At this point in Futaba’s Palace, Ann has three fire skills (depending on the skills you learned) at her disposal. Adding a Baton Pass will increase her strength, so her move will do immense damage. More damage comes from the Baton Pass than the All-Out Attack.

The second step, not everyone has fire or curse skills, but the party can still use items. Be sure to stock up on Molotov cocktails, blowtorch, Hell Magatama, Curse Bomb, Five-Inch Nail, and Straw Doll (this one may not work) for the rest of the party to help make the fight easier.

Of course, Joker can also use Personas with fire skills, not to mention he starts with Arsene (Comprehensive Arsene Guide), who has curse skills, helping switch up the flow of the battle. Alternate between the Baton Pass and All-Out Attack, and this battle will be over in a flash since he has little HP.

He has every elemental skill, so be careful of having your weakness exposed. That said, burn it with fire, and we are getting out of here quick. Don’t forget you can recruit Stone of Scone if you wish. 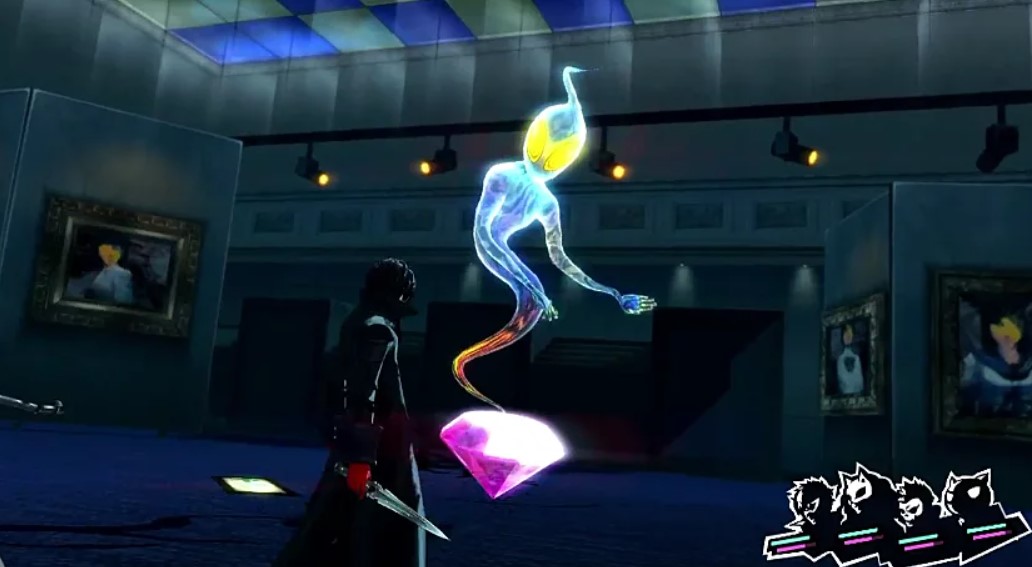 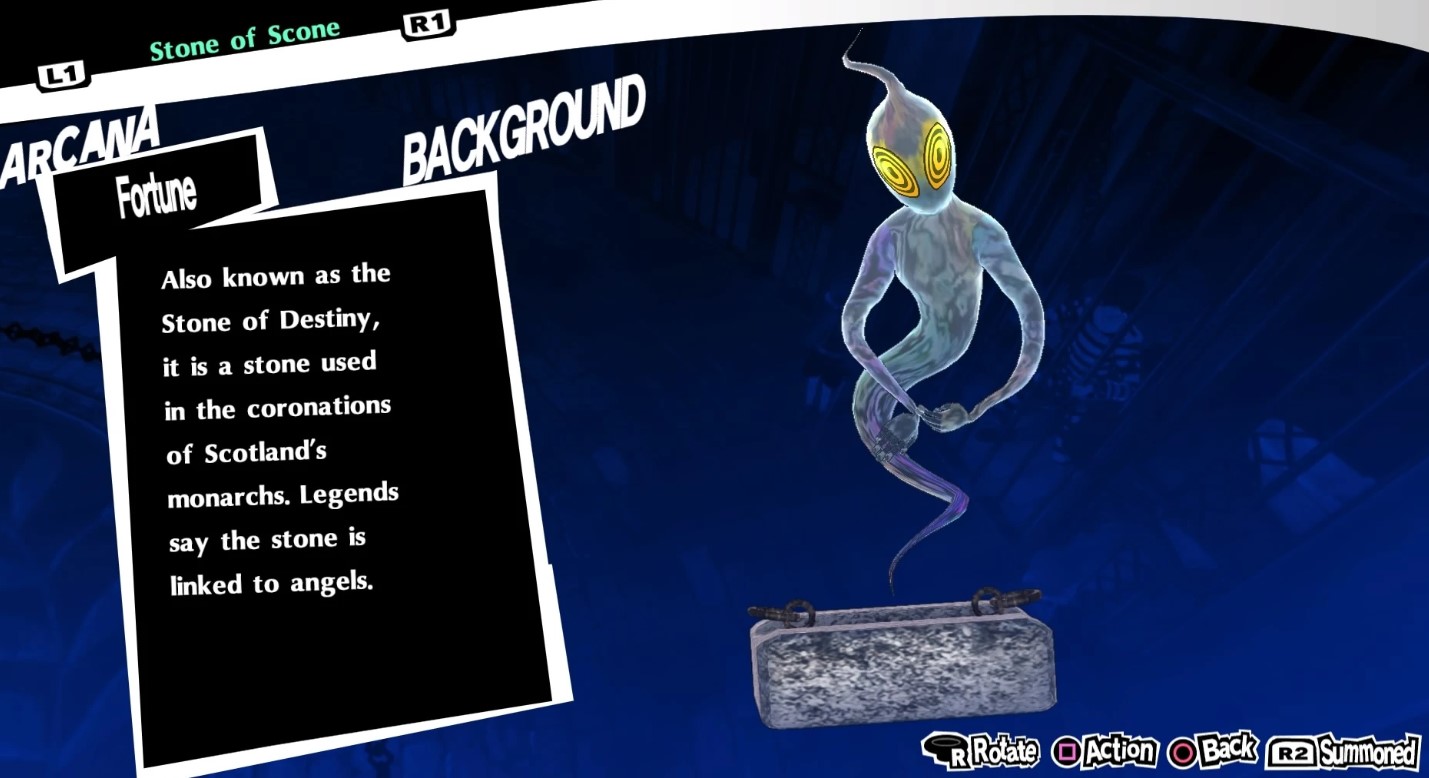 Stone of Scone is one of the best Personas if you have not unlocked “Sleuthing Instinct” with Goro Akechi. You can go down his list of skills to find a shadow’s weakness and not have to switch party members out. It’s as if you collected all the infinity stones and tested each one on someone new.

In Persona 5 Royal, each persona has traits you can pass off when fusing. Stone of Scone has three, starting with Gluttonmouth. A trait that increases the HP healed to self by 50%.

Next up is Intense Focus, and that increases your magic attack strength on a single target by 20%.

Last but not least is my favorite skill of his Relentless, 50% attack boost when striking an enemy weakness, but only on single targets. Any of these traits are great to pass on with a fusion.

Below are the list of skills Stone of Scone has the moment he joins the team:

Question: Can I use Stone of Scone in the Velvet Room’s electric chair?

Answer: Of course. You will get the Stone of Scone accessory, and during a fusion alarm, you’ll get Stone of Scone R. It will raise your endurance and reduce a little physical damage the user takes.

Question: What are some Personas that have fire skills?

Answer: Early in the game, you can find a Jack-o’-Lantern and Hua Po. Both of them know Agi, which is enough to bring Stone of Scone down.

Question: Why does Stone of Scone have different weaknesses between games?

Answer: Persona 5 Royal fixed a lot of issues the base game had. As weaknesses go, the developers looked at the game and adjusted certain shadows to the skills available to the party at that point in the game.

This brings us to the end of the weakness guide. Stone of Scone is not difficult once you find the strategy that works best for you. As long as curse and fire are involved (depending on which game you are playing), you should be fine.

I appreciate the treasure demons more in Persona 5/Royal than in previous installments because you know there is a set time before they flee.

In Persona 4 Golden, the gold hands would just run off whenever they felt like it. With the Phantom Thieves, you know you have at least four turns before they take off. Just remember, if you don’t bring the heat, Stone of Scone will make it out of the kitchen.