Justin Cook
Story Driven games have always been Justin's jam, and this naturally led to him becoming a seasoned JRPG veteran. His standout favorites include Kingdom Hearts, Final Fantasy and Persona, and this love of JRPGs makes him a handy companion, whether you need a hand navigating Momentos, or just want to hit Shibuya for some Ramen.

Since the dawn of time hidden and optional bosses have always been plugged into video games. They are never easy either, but that is what makes beating them feel so much more satisfying.

Persona 4 and Persona 4 Golden join in on the trend with some of their own, and today we will discuss the Contrarian King. This Contrarian King guide is going to give you the proper strategy for defeating him.

The timing is perfect since Persona 4 Golden has been announced for a re-release on the Playstation 4, Playstation 5, Xbox One, Series X/S, and Nintendo Switch early next year.

An optional boss in any game is precisely what the title claims, optional. They provide a challenge if sought out aside from the main storyline. When I stumbled on him in my first play, I thought he was a normal Persona enemy. I quickly got swept under the rug in that fight.

They are also exclusive to this game alone. Like any other boss, you can only encounter them once. Contrarian King only appears in Persona 4/Golden and is very difficult with how early you can fight him. He also falls into the Emperor arcana, but that doesn’t have too much effect on you. Without further ado, let us go overthrow a king.

You can’t possibly hope and expect to call yourself a king if you don’t look the part. Contrarian King does not disappoint on this front. Head to toe screams royalty, starting with the crown sitting upon his powdered wig.

His red robe matches the decorated red shirt he has on, but we can’t forget about his puffy blue pants fit for a king. Lastly, his weapon is the royal staff fully rounds out his look. He looks the part to back up being king, but he certainly backs it up with fighting as well. 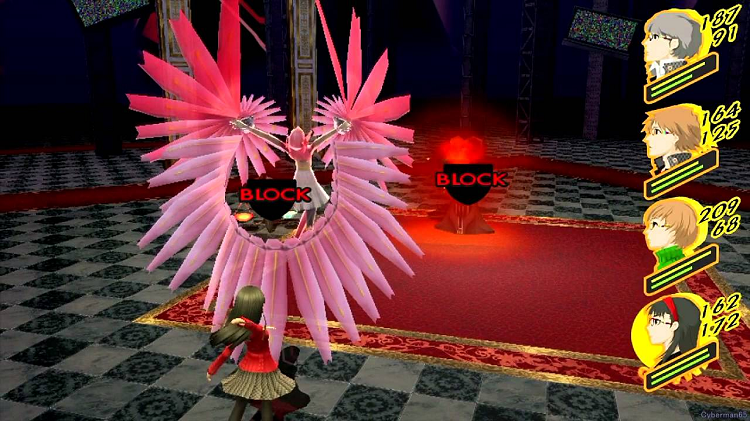 Unlike Persona 5, Persona 4 Golden does not have a place like mementos where you can explore and fight shadows. Instead, the game offers the player the ability to return to the palaces. I returned to Yukiko’s Castle to level up, and that’s when I made it to the throne room. The place where we fought Shadow Yukiko, right?

I made a mistake thinking the Contrarian King was another weak doppelgänger in the game. He was sitting right on Yukiko’s throne as the new ruler of her castle. He quickly tossed me out from his presence like the Izanagi (fool persona joke) I was. When I came back, I was all about business.

The Persona series are the first games where being under-leveled on normal difficulty makes the game harder. I went in, thinking three or four levels under Contrarian King, and did not last long.

Fighting Contrarian King under-leveled is a game of luck because his attacks can wipe you and your team with one move. Add that he has no weakness to the list of things to keep in mind.

So the first thing you’ll have to do is make sure the party is no lower than level 16. My strategy was to wait until I beat Kanji’s Steamy Bathhouse. I knew by that point I would be strong enough to defeat the king with little worry. Next you’ll want to buff your party and debuff everything else.

Contrarian King has three skills that will put your party in critical danger, Hysterical Slap, Rampage, and Kill Rush. Rampage is the deadliest, seeing as it can attack the entire party 1x- 3x. Kill Rush isn’t utilized as much as the other two, but make no mistake, it is still a threat.

Use Yosuke’s skill Sukukaja to boost your ally’s evasion. Make sure to reapply the spell anytime it wears off, so his moves have a lower chance of connecting with you. If you have a persona that also can resist physical attacks will also come in handy.

The next skill you should use is Tarunda to decrease the attack power of the enemy. Lastly, Yukiko is important to keep alive because she has the best healing for the entire party.

Now for the part you have been waiting for, which is the offense. Electric and ice moves will bypass the resistances the boss has. Physical attacks don’t do a lot of damage to Contrarian King, but there is still a chance a skill like Lucky Punch will knock him down.

If you get the opportunity for an “All-Out Attack,” you can use it, but to me, it’s not worth it. All-Out Attack does the same amount as a normal attack from a single party member, so dealer’s choice if you want to utilize that mechanic. Just remember there isn’t a baton pass in this game.

Last-minute things to also be wary of in the fight. Hysterical Slap has a chance of infecting the victim with rage. Your attack power will rise, but defense, evasion, and accuracy are all halved, plus the character won’t listen to commands and only use basic attacks.

There is also a chance it can knock a party member down. Stick to this strategy and you will be on the path to victory. 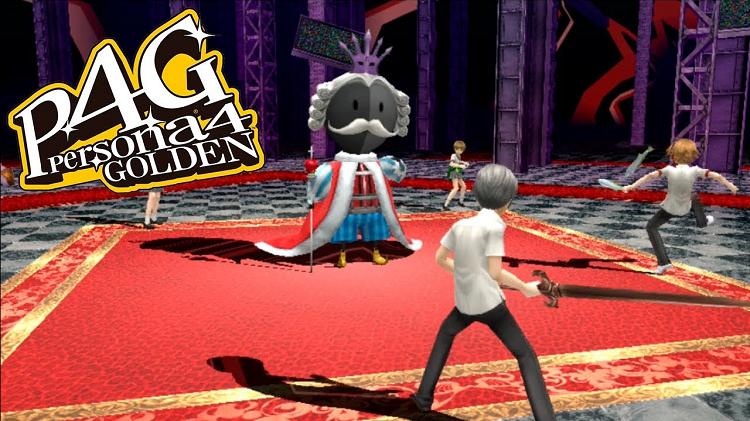 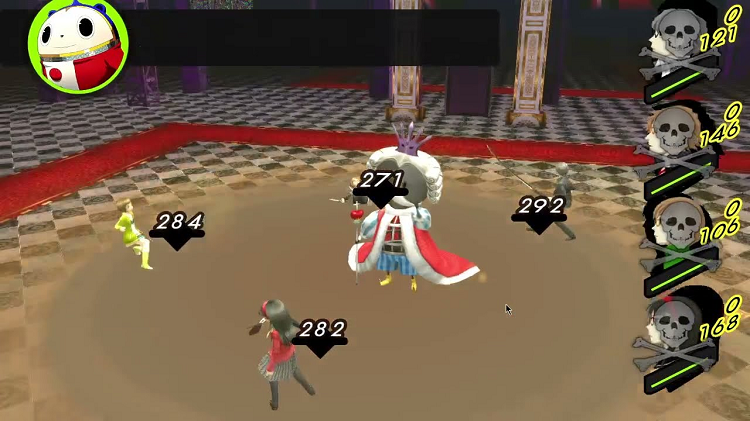 So you made it here and defeated the Contrarian King. Your first thought is to leave the castle and never come back, but do not do that quite yet. If anything, save and come back to this room so you can collect your reward! In the room is a new weapon for Yukiko called the Suzaku Feather.

Depending on when you defeat Contrarian King, this weapon could have you set for a while. I know the frustrations of buying a weapon only to find a stronger one for free. Hopefully this saves you from doing that. Below are the stats for the weapon.

Question: Do I Have to Beat Contrarian King to Get the True Ending for the Game?

Answer: No. None of the optional bosses are a requirement for you or the true ending. The true ending has its own set of requirements. That being said, if you want the Suzaku Feather, you will have to fight for it.

Question: Can I Fight Contrarian King More than Once?

Answer: Not in the same save. Once you defeat him in Yukiko’s Castle, he is gone for good.

Question: Can I Get Contrarian King as a Persona?

Answer: Sadly, no you can not. Contrarian King is here solely to make our lives difficult. Having a strong persona like him that early in the game would make a few of the future fights so much easier.

Yukiko’s castle is a difficult dungeon to come across first. The mini-bosses and shadows lurking in her castle each pose a threat of their own.

From Shadow Chie to the Avenger Knight, Shadow Yukiko makes sure to give you a run for your money trying to reach her. Then you got the Contrarian King immediately after all of that. It feels like you are working your way up the old school Mortal Kombat fight ladder.

I also like to leave no stone unturned. I felt I needed to defeat everything before I got too deep in the game. There are a few games that I have completed, but feel guilty because optional bosses did not fall by my hand.

I had to make sure Contrarian King fell for my peace of mind. See for yourself and play Persona 4 Golden either now or when it re-releases next year.